Let the two given points be P`(x_1, y_1, z_1)` and Q `(x_2, y_2, z_2)`. Let the point R (x, y, z) divide PQ in the given ratio m : n internally. Draw PL, QM and RN perpendicular to the XY-plane. Obviously PL || RN || QM and feet of these perpendiculars lie in a XY-plane. The points L, M and N will lie on a line which is the intersection of the plane containing PL, RN and QM with the XY-plane. Through the point R draw a line ST parallel to the line LM. Line ST will intersect the line LP externally  at the point S and the line MQ at T, Fig 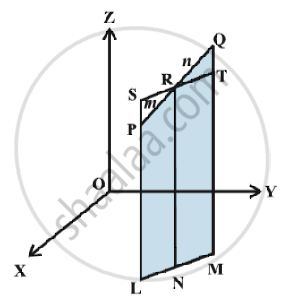 If the point R divides PQ externally in the ratio m : n, then its coordinates are obtained by replacing n by – n so that coordinates of point R will be