Three - Dimensional Geometry - Coordinates of a Point in Space

Now explain a point in the space , with three coordinates (x,y,z) and conversely, given a triplet of three numbers (x, y, z).
Given a point P in space , we drop a perpendicular PM on the XY-plane with M as the foot of this perpendicular Fig. 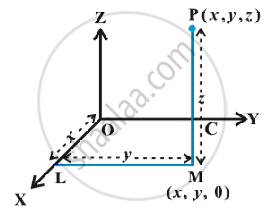 Then, from the point M, we draw a perpendicular ML to the x-axis, meeting it at L. Let OL be x, LM be y and MP be z. Then x,y and z are called the x, y and z coordinates, respectively, of the point P in the space.  the point P (x, y, z) lies in the octant XOYZ and so all x, y, z are positive.  If P was in any other octant, the signs of x, y and z would change accordingly. Thus, to each point P in the space there corresponds an ordered triplet (x, y, z) of real numbers.
Conversely , given any triplet (x,y,z) , we would first the point L on the x-axis corresponding to x, then locate the point M in the XY-plane such that (x, y) are the coordinates of the point M in the XY-plane.  Note that LM is perpendicular to the x-axis or is parallel to the y-axis. Having reached the point M, we draw a perpendicular MP to the XY-plane and locate on it the point P corresponding to z. The point P so obtained has then the coordinates (x, y, z). Thus, there is a one to one correspondence between the points in space and ordered triplet (x, y, z) of real numbers.

Shaalaa.com | Coordinates of a Point in Space