In order to overcome the objections raised against Rutherford’s model of the atom, Neils Bohr put forward the following postulates about the model of an atom:

(i) Only certain special orbits known as discrete orbits of electrons, are allowed inside the atom.

(ii) While revolving in discrete orbits the electrons do not radiate energy. 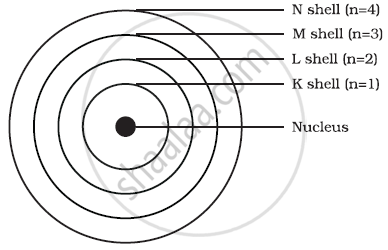 Compare all the proposed models of an atom given in this chapter.

Draw a sketch of Bohr’s model of an atom with three shells.

Describe Bohr’s model of the atom.

Name the scientists who described the arrangement of electrons in an atom.

What are the various letters used by Bohr to represent electron shells in an atom?

Name the central part of an atom where protons and neutrons are held together.

Describe Bohr's model of the atom. How did Neils Bohr explain the stability of atom?