With the help of the internet, obtain information regarding annual average temperatures of the continental location of Brasilia and Bhopal and explain it with the help of a graph.

Study the graphs given in figure and answer the following questions:

(i)  What difference do you find in the rainy seasons of Chennai and other cities of India? Why?
(ii)  What similarity do you see in the temperature curves of Delhi and Kolkata ?
(iii) Calculate the average range of minimum and maximum temperatures of all the four cities.
(iv)  In which city is the range minimum? What can you infer from this?
(v)  In which city is the range maximum? What can you infer from this about its climate?
(vi) Based on the temperature and rainfall of Mumbai, comment upon its climate.
(vii)  In which month does India experience the highest rainfall?
(viii)  Classify the cities as cities with equableand extreme climates. 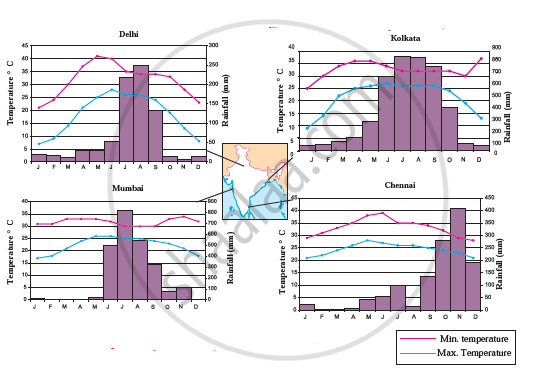 In which part of India are three crops grown in a year? How is this related to the rainfall over there?