What are the respiratory substrates? Give two examples.

What is respiration? How are respiration and burning similar and how are they different?

Where does glycolysis take place in the living cell?

Combustion is a biological process.

Protein is the first choice as a respiratory substrate.

The respiration is faster than combustion.

Can cell respiration occur in any organism at a temperature of about 65°C? Give reason.

Moist germinated seeds were placed in a thermos flask A, and germinating seeds, which were boiled and then soaked in 5 percent formalin, were placed in thermos flask B. Thermometers were inserted in the flask and the mouth of each flask plugged with moist cotton wool. The two flasks were fixed upside down as shown in the fig. 10.9. The temperature on both thermometers was noted. After about 48 hours, the temperature in flask A was found to be much higher than that in flask B. 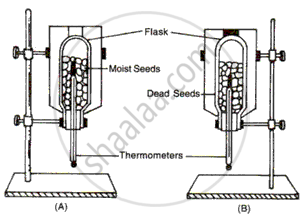 (a) State the object of using the apparatus.

(b) Explain, why a rise in temperature occurs in flask A.

(c) If 5 percent formalin was not used after boiling the seeds, the temperature of flask B would have risen considerably. Explain.