The sequence in which nitrogen passes from the atmosphere to the soil and organisms, and then is eventually released back into the atmosphere, is called nitrogen cycle. 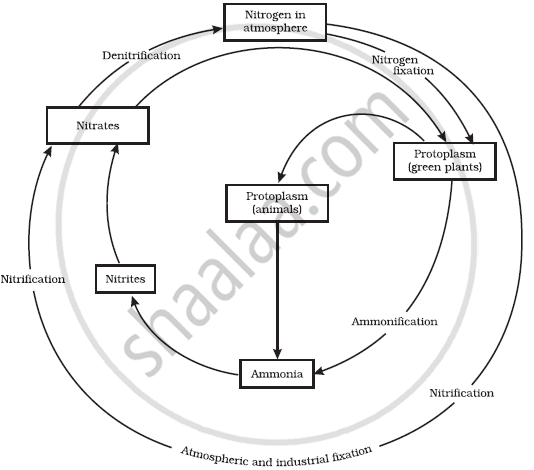 Nitrogen gas makes up 78% of our atmosphere and nitrogen is also a part of many molecules essential to life like proteins, nucleic acids (DNA and RNA) and some vitamins. Nitrogen is found in other biologically important compounds such as alkaloids and urea too. Nitrogen is thus an essential nutrient for all life-forms and life would be simple if all these life-forms could use the atmospheric nitrogen directly. However, other than a few forms of bacteria, life-forms are not able to convert the comparatively inert nitrogen molecule into forms like nitrates and nitrites which can be taken up and used to make the required molecules. These ‘nitrogen-fixing’ bacteria may be free-living or be associated with some species of dicot plants. Most commonly, the nitrogen-fixing bacteria are found in the roots of legumes (generally the plants which give us pulses) in special structures called root nodules. Other than these bacteria, the only other manner in which the nitrogen molecule is converted to nitrates and nitrites is by a physical process. During lightning, the high temperatures and pressures created in the air convert nitrogen into oxides of nitrogen. These oxides dissolve in water to give nitric and nitrous acids and fall on land along with rain. These are then utilised by various lifeforms.

Fill in the blanks: