“To every action, there is an equal and opposite reaction and they act on two different bodies.” 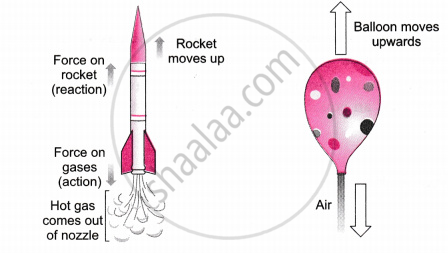 Out of the three laws of motion, this is the most popular and widely known. Eg: While jumping, we exert our force downwards to the ground, and consequently we move up. This is because the ground is exerting the same force in the opposite direction.

When a gun is fired, it exerts a forward force on the bullet. The bullet exerts an equal and opposite force on the gun. This results in the recoil of the gun 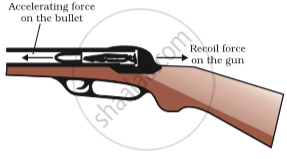 Explain, why is it difficult for a fireman to hold a hose, which ejects large amounts of water at a high velocity.

Explain how a rocket works.

According to the third law of motion when we push on an object, the object pushes back on us with an equal and opposite force. If the object is a massive truck parked along the roadside, it will probably not move. A student justifies this by answering that the two opposite and equal forces cancel each other. Comment on this logic and explain why the truck does not move.

Using a horizontal force of 200 N, we intend to move a wooden cabinet across a floor at a constant velocity. What is the friction force that will be exerted on the cabinet?

A stone of 1 kg is thrown with a velocity of 20 m s−1 across the frozen surface of a lake and comes to rest after travelling a distance of 50 m. What is the force of friction between the stone and the ice?

If action is always equal to the reaction, explain how a horse can pull a cart.

What is the force which produces an acceleration of 1 m /s2  in a body of mass 1 kg ?

A girl weighing 25 kg stands on the tloor. She exerts a downward force of 250 N on the floor. What force does the floor exert on her ?