“The rate of change of momentum of an object is proportional to the applied unbalanced force in the direction of the force.” 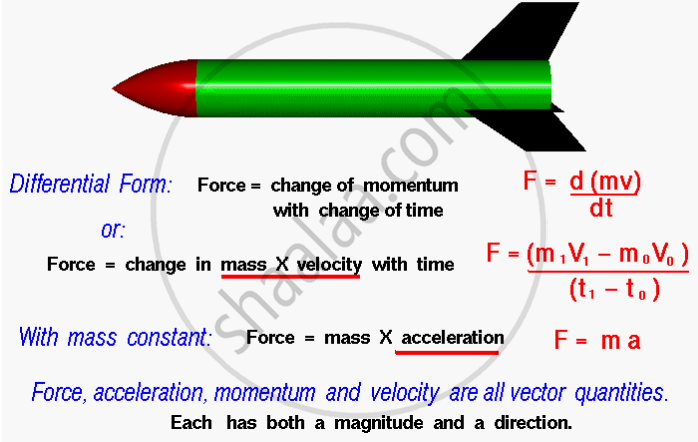 This law of motion is also called the Law of Force and Acceleration. It means that force is equal to the change in momentum per change in time. For a constant mass, force equals mass times acceleration.

Suppose an object of mass, m is moving along a straight line with an initial velocity, u. It is uniformly accelerated to velocity, v in time, t by the application of a constant force, F throughout the time, t. The initial and final momentum of the object will be, p1 = mu and p2 = mv respectively.

or, the applied force,

Here a = [(v – u)/t] is the acceleration, which is the rate of change of velocity. The quantity, k is a constant of proportionality.

The SI units of mass and acceleration are kg and m/s2 respectively.

Thus, the value of k becomes 1.

The unit of force is kg m s-2 or newton, which has the symbol N. The second law of motion gives us a method to measure the force acting on an object as a product of its mass and acceleration.

Explain the meaning of the following equation :
F = m x a
where symbols have their usual meanings

Which of the following situations involves the Newton's second law of motion?

Two persons manage to push a motorcar of mass 1200 kg at a uniform velocity along a level road. The same motorcar can be pushed by three persons to produce an acceleration of 0.2 m s−2. With what force does each person push the motorcar? (Assume that all persons push the motorcar with the same muscular effort)

The following is the distance-time table of an object in motion:-

(a) What conclusion can you draw about the acceleration? Is it constant, increasing, decreasing, or zero?

(b)What do you infer about the forces acting on the object?

An automobile vehicle has a mass of 1500 kg. What must be the force between the vehicle and road if the vehicle is to be stopped with a negative acceleration of 1.7 m s−2?

A bullet of mass 10 g travelling horizontally with a velocity of 150 m s−1 strikes a stationary wooden block and comes to rest in 0.03 s. Calculate the distance of penetration of the bullet into the block. Also calculate the magnitude of the force exerted by the wooden block on the bullet.

Fill in the following blanks with suitable words :

A body of mass 5 kg is moving with a velocity of 10 m/s. A force is applied to it so that in 25 seconds, it attains a velocity of 35 m/s. Calculate the value of the force applied.