Sublimation in chemistry refers to the phase transition in which matter changes state from a solid immediately into a gas, without passing through an intermediate liquid phase. Sublimation occurs when atmospheric pressure is too low for a substance to exist in liquid form. Sublimation is the inverse of deposition, the phase transition in which gas goes immediately to a solid state. Whether or not a substance will sublimate from a solid to a gaseous state depends on the triple point of the substance, the temperature and pressure at which a substance exists in equilibrium as the three states of matter.

A substance will only sublimate at temperatures and pressures lower than the substance’s triple point.

Experiment of the separation of ammonium chloride and salt by sublimation. 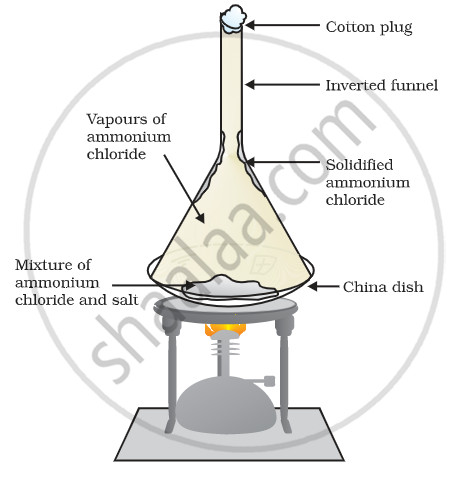 Observation: Ammonium chloride on heating, was evaporated and salt was left behind.

Result/ Inference: Ammonium chloride changed its state directly from solid to gas without changing into a liquid state. Hence, salt got separated.

An example of a substance that sublimes is ______.