While learning this chapter we have to be fimiliar with few terms. 2) Diameter- In geometry, a diameter of a circle is any straight line segment that passes through the center of the circle and whose endpoints lie on the circle.

3) Origin- Origin is the centre of the circle. Circle is represented as C (o,r) where o is origin and r is the radius.

4) Chord- A chord of a circle is a straight line segment whose endpoints both lie on the circle. More generally, a chord is a line segment joining two points on any curve. Diameter is the longest chord.

5) Secant- A secant is a line which cuts a circle at two points.

6) Tangent- A straight line that cuts a circle at one single point. The radius of a circle is always perpendicular to the tangent line through its endpoint on the circle's circumference. Conversely, the perpendicular to a radius through the same endpoint is a tangent line, this we will prove in a theorem further.

7) Segment- The segment of a circle is the region bounded by a chord and the arc subtended by the chord. 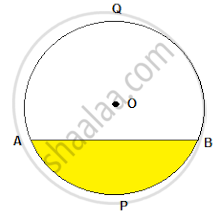 8) Arc-The arc of a circle is a portion of the circumference of a circle. In the figure above AB is a arc in the shaded segment.

9)Sector- The secotor is the portion of a disk enclosed by two radii and an arc, where the smaller area is known as the minor sector and the larger being the major sector.

The angle between tangent at a point on a circle and the radius through the point is ........

In the given figure, a ∆ABC is drawn to circumscribe a circle of radius 4 cm such that the segments BD and DC are of lengths 8 cm and 6 cm respectively. Find the lengths of sides AB and AC, when area of ∆ABC is 84 cm2. 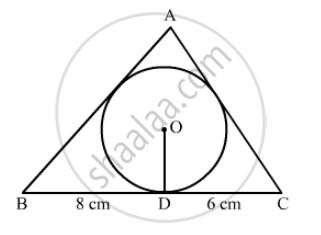 In the given figure, BC is a tangent to the circle with centre O. OE bisects AP. Prove that ΔAEO~Δ ABC. 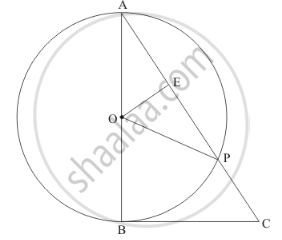 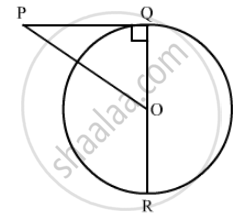