There were times, when the Indian hockey team used to return home victorious from international matches; Indian wrestlers like Khashaba Jadhav earned fame in international wrestling. Khashaba Dadasaheb Jadhav was an Indian athlete. He is best known as a wrestler who won a bronze medal at the 1952 Summer Olympics in Helsinki. He was the first athlete from independent India to win an individual medal in the Olympics. After Norman Pritchard who won two silver medals in athletics in 1900 under colonial India, Khashaba was the first individual athlete from independent India to win a medal at the Olympics. In the years before Khashaba, India would only win gold medals in field hockey, a team sport. He is the only Indian Olympic medalist who never received a Padma Award. Khashaba was extremely nimble on his feet, which made him different from other wrestlers of his time. English coach Rees Gardner saw this trait in him and trained him prior to the 1948 Olympic games.

In the course of globalisation some new sports became popular and many sportspersons emerged from various parts of the country. With globalisation, one thing had become very clear that sportspersons with extraordinary skills will only rise in their career. The present scenario of the sports world has an unmistakable message that yesteryears of success do not guarantee success today or tomorrow. In other words, a champion in the past may lose his position any time, if he does not keep up the hard work. It is essential for sportspersons in all fields to prove themselves every time they play.

New records have been made every day to break the old ones. The formats and the rules of the games are being modified time and again. Let’s elaborate this with the example of the game of cricket. In the olden days, a cricket match used to run for five days. Then one-day matches were introduced and then the cricket matches were limited only to 20 overs. Earlier, a wrestling match was not concluded till one of the wrestlers was pinned down (chitpat karane) completely. However, now a wrestling match gets concluded on the basis of points scored by the wrestlers.

There are a number of sports journals published in India. Some television channels are devoted to sports. The audience of sports channels, advertisements shown on these channels, time-slots, and expenses of these advertisements are vital factors, which have shaped an independent sphere of marketing.

There are independent clubs/associations of each sport established in India. These associations are investing on large scale in sportspersons on individual merit. A football player may be adopted professionally by a football club. Then the club would take care of the player including his training. He/she has to sign a professional contract with the club. The player’s name gets associated with the club. The IPL matches of cricket, the World Cup matches of one day cricket, and 20-20 cricket or the matches organized by the Pro Kabaddi League in India, presently known as ‘Vivo Kabaddi League’ are the examples of professionalization of the sports world. The professionally played matches have gained a worldwide audience. That has resulted in an increase of the honorarium of the players.

The government is also taking note of sportspersons for their performance. Sportspersons, who perform extraordinarily well are honored with various awards. Sachin Tendulkar was awarded the highest award of ‘Bharat Ratna’ by the government. He was nominated as ‘Member of Rajyasabha’ (Khasdar). Sachin Ramesh Tendulkar is an Indian former international cricketer who served as captain of the Indian national team. He is widely regarded as one of the greatest batsmen in the history of cricket. He is the highest run-scorer of all time in International cricket. Considered as the world's most prolific batsman of all time, he is the only player to have scored one hundred international centuries, the first batsman to score a double century in a One Day International (ODI), the holder of the record for the most runs in both Test and ODI cricket, and the only player to complete more than 30,000 runs in international cricket. In 2013, he was the only Indian cricketer included in an all-time Test World XI named to mark the 150th anniversary of Wisden Cricketers' Almanack. He is affectionately known as Little Master or Master Blaster.

India has produced a legacy of brave hearts since times immemorial. Probably there is not enough space to measure their sacrifices. However, we cannot close our eyes to those people who have made our country proud by excelling in their own fields and bringing us international recognition. Bharat Ratna is the highest civilian honour, given for exceptional service towards the advancement of Art, Literature, and Science, and in recognition of Public Service of the highest order. It is also not mandatory that Bharat Ratna be awarded every year.

The original specifications for the award called for a circular gold medal, 35 mm in diameter, with the sun and the Hindi legend "Bharat Ratna" above and a floral wreath below. The reverse was to carry the state emblem and motto. It was to be worn around the neck from a white ribbon. This design was altered after a year.

Write the name of the historical place/ person/event.

The player who was awarded the highest title, ‘Bharat Ratna’ -

Answer the following question in detail.

Explain the sports policy of the Government of India. 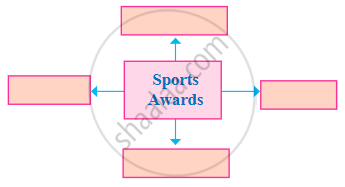