-A part of the source energy in maintaining the current may be consumed into useful work (like in rotating the blades of an electric fan). Rest of the source energy may be expended in heat to raise the temperature of gadget. We often observe this in our everyday life. For example, an electric fan becomes warm if used continuously for longer time etc.

-On the other hand, if the electric circuit is purely resistive, that is, a configuration of resistors only connected to a battery; the source energy continually gets dissipated entirely in the form of heat. This is known as the heating effect of electric current. This effect is utilised in devices such as electric heater, electric iron etc.

We know that V=IR, substituting the value of V in eq 1

-The electric laundry iron, electric toaster, electric oven, electric kettle and electric heater are some of the familiar devices based on Joule’s heating.

-The electric heating is also used to produce light, as in an electric bulb. Here, the filament must retain as much of the heat generated as is possible, so that it gets very hot and emits light. It must not melt at such high temperature. A strong metal with high melting point such as tungsten (melting point 3380°C) is used for making bulb filaments. The filament should be thermally isolated as much as possible, using insulating support, etc. The bulbs are usually filled with chemically inactive nitrogen and argon gases to prolong the life of filament. Most of the power consumed by the filament appears as heat, but a small part of it is in the form of light radiated.

-Another common application of Joule’s heating is the fuse used in electric circuits. It protects circuits and appliances by stopping the flow of any unduly high electric current. The fuse is placed in series with the device. It consists of a piece of wire made of a metal or an alloy of appropriate melting point, for example aluminium, copper, iron, lead etc. If a current larger than the specified value flows through the circuit, the temperature of the fuse wire increases. This melts the fuse wire and breaks the circuit. The fuse wire is usually encased in a cartridge of porcelain or similar material with metal ends.

State four most common electrical appliances based on heating effect of electric current. Why do we use finely heated platinum wire in surgery?

Give Scientific reason
For electric power transmission, copper or aluminium wire is used.

Give Scientific reason
Tungsten metal is used to make a solenoid type coil in an electric bulb.

Give Scientific reason
In the electric equipment producing heat e.g. iron, electric heater, boiler, toaster etc, an alloy such as Nichrome is used, not pure metals.

Give Scientific reason
In practice the unit kWh is used for the measurement of electrical energy, rather than joule.

Identify the figures and explain their use. 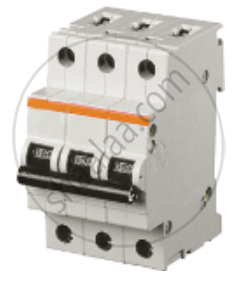