Gravity is one of the most basic forces in the universe. It plays a fundamental role not only in the structure of our solar system but also in the way objects behave on earth. In this section we will talk about gravity on a small scale. We will discuss topics such as weight, free fall, and ballistics. We will learn the physics of phenomena we experience daily and take for granted.

We know that the moon goes around the earth. An object when thrown upwards, reaches a certain height and then falls downwards. It is said that when Newton was sitting under a tree, an apple fell on him. The fall of the apple made Newton start thinking. He thought that: if the earth can attract an apple, can it not attract the moon? Is the force the same in both cases? He conjectured that the same type of force is responsible in both the cases. He argued that at each point of its orbit, the moon falls towards the earth, instead of going off in a straight line. So, it must be attracted by the earth. But we do not really see the moon falling towards the earth.

If the distance between two masses is doubled, the gravitational force between them becomes less than the previous force.

What is the free fall?

Write proper answer in the box:

A _______ is necessary to change the speed as well as the direction of motion of an object.

Identify the mistake in the given diagram and draw it again. 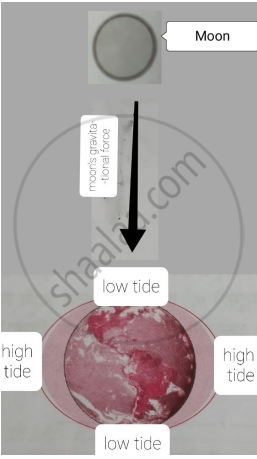