Force Acting on Current Carrying Conductor in a Magnetic Field

FORCE ON A CURRENT-CARRYING CONDUCTOR IN A MAGNETIC FIELD:-

The direction of force over the conductor gets reversed with the change in direction of flow of electric current. It is observed that the magnitude of force is highest when the direction of current is at right angles to the magnetic field. 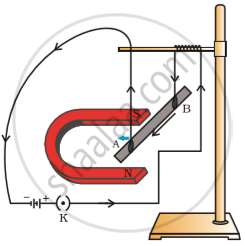 to keep track of your progress.
Magnetic Effects of Current part 8 (Magnetic Force) [00:12:51]
S
to track your progress

Differentiate between Conductors and insulators.