Distance is a numerical quantity. We do not mention the direction in which an object is travelling while mentioning about the distance covered by that object.

Displacement: The shortest possible distance between the initial and final position of an object is called Displacement. Displacement is denoted by Δx.

Zero Displacement: When the first and last positions of an object are same, the displacement is zero. 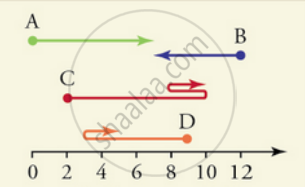 Here, displacement of object B is negative

Also, displacement of object A is positive

to keep track of your progress.
Motion part 3 (Scalar and vector quantity) [00:04:41]
S
to track your progress

What information about the motion of a body are obtained from the displacement-time graph?

When is the magnitude of displacement equal to the distance?

Differentiate between distance and displacement.

Can displacement be zero even if the distance is not zero? Give one example to explain your answer.

A body when projected up with an initial velocity u goes to a maximum height h in time t and then comes back at the point of projection. The correct statement is ______________

Can displacement-time sketch be parallel to the displacement axis? Give a reason to your answer.

A train takes 3 h to travel from Agra to Delhi with a uniform speed of 65 km h-1. Find the distance between the two cities.