Demand Curve and Its Slope

Demand Curve and Its Slope: 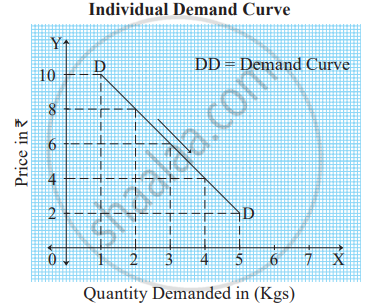 We have seen that marginal utility goes on diminishing with an increase in the stock of a commodity and vice-versa. Therefore, a consumer tends to buy more when price falls and vice-versa. This implies that demand curve is downward sloping.

In the case of normal goods, when price falls, purchasing power (real income) of a consumer increases which enables him to buy more of that commodity. This is known as income effect.

In case of substitute goods, when the price of a commodity rises, the consumer tends to buy more of its substitute and less of that commodity
whose price has increased. This is known as substitution effect.

When the price of a commodity falls, a new consumer class appears who can now afford the commodity. Thus, total demand for commodity increases
with fall in price.

State with reason, whether you Agree or Disagree with the following statement.

What are the assumptions of the Law of Demand?

Fill in the blank using proper alternative given in the bracket:

Define or explain the following concept.

The slope of demand curve is ___________ in the case of relatively inelastic demand.
[flatter/ steeper/ horizontal / vertical]

State with reason whether you 'agree' or 'disagree' with the following statement.

Explain the law of demand with its assumptions.