Criteria for Congruence of Triangles

For instance, Draw two triangles with one side 3 cm. Are these triangles are not  congruent in following fig .

Case (iii) :  If AB < DE, we can choose a point M on DE such that ME = AB and repeating the arguments as given in Case (ii),  we can conclude that AB = DE and so, ∆ ABC ≅ ∆ DEF.
You know that the sum of the three angles of a triangle is 180°. So if two pairs of angles are equal, the third pair is also equal (180° – sum of equal angles).
So, two triangles are congruent if any two pairs of angles and one pair of corresponding sides are equal. We may call it as the AAS Congruence Rule.

ABCD is a quadrilateral in which AD = BC and ∠DAB = ∠CBA (See the given figure). Prove that 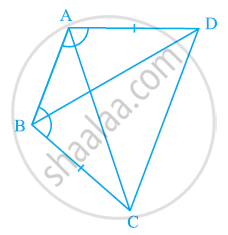 If perpendiculars from any point within an angle on its arms are congruent, prove that it lies on the bisector of that angle.

ABCD is a square, X and Yare points on sides AD and BC respectively such that AY = BX. Prove that BY = AX and ∠BAY = ∠ABX.

Line l is the bisector of an angle ∠A and B is any point on l. BP and BQ are perpendiculars from B to the arms of ∠A (see the given figure). Show that:- 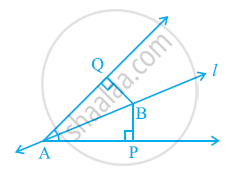 In the given figure, prove that: 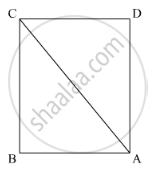