Law of conservation of Momentum:
From Newtons third law of motion we know that whenever a force is applied on a body there will be an equal and opposite reaction. Action and reaction forces result in change in velocities of both the bodies which in turn change the momentum of the bodies.

Law of conservation of motion states that if a group of bodies are exerting force on each other. ie. Interacting with each other, their total momentum remains constant before and after the collision provided there is no external force acting on them. 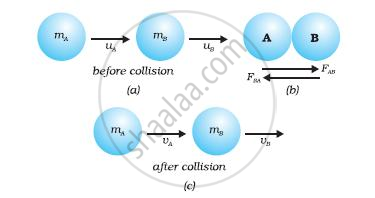 Suppose two objects (two balls A and B, say) of masses mA and mB are travelling in the same direction along a straight line at different velocities uA and uB, respectively [Fig.(a)]. And there are no other external unbalanced forces acting on them. Let uA > uB and the two balls collide with each other as shown in Fig.(b). During collision which lasts for a time t, the ball A exerts a force FAB on ball B and the ball B exerts a force FBA on ball A. Suppose vA and vB are the velocities of the two balls A and B after the collision, respectively [Fig.(c)].

the momenta (plural of momentum) of ball A before and after the collision are mAuA and mAvA, respectively. The rate of change of its momentum (or FAB) during collision will be

Similarly, the rate of change of momentum of ball B=(FBA) during the collison will be

According to the third law of motion, the force FAB exerted by ball A on ball B and the force FBA exerted by the ball B on ball A must be equal and opposite to each other. Therefore, FAB = – FBA or

A ball X of mass 1 kg travelling at 2 m/s has a head-on collision with an identical ball Y at rest. X stops and Y moves off. Calculate the velocity of Y after the collision.

(i) the velocity with which the gin recoils.
(ii) the force exerted on gunman due to recoil of the gun

Explain why, it is easier to stop a tennis ball than a cricket ball moving with the same speed.

The rockets work on the principle of conservation of :

Name the principle on which a rocket works.

State the law of conservation of momentum.

A hockey ball of mass 200 g travelling at 10 m s−1 is struck by a hockey stick so as to return it along its original path with a velocity at 5 m s−1. Calculate the change of momentum occurred in the motion of the hockey ball by the force applied by the hockey stick.

An object of mass 1 kg travelling in a straight line with a velocity of 10 m s−1 collides with, and sticks to, a stationary wooden block of mass 5 kg. Then they both move off together in the same straight line. Calculate the total momentum just before the impact and just after the impact. Also, calculate the velocity of the combined object.