The process of supplying food, oxygen, carbon dioxide through out the body is performed by the circulatory system.

Blood consists of a fluid medium called plasma in which the cells are suspended. Plasma transports food, carbon dioxide and nitrogenous wastes in dissolved form.

Oxygen is carried by the red blood corpuscles. Many other substances like salts, are also transported by the blood.

We thus need a pumping organ to push blood around the body, a network of tubes to reach all the tissues and a system in place to ensure that this network can be repaired if damaged.

The circulatory system consists of:- 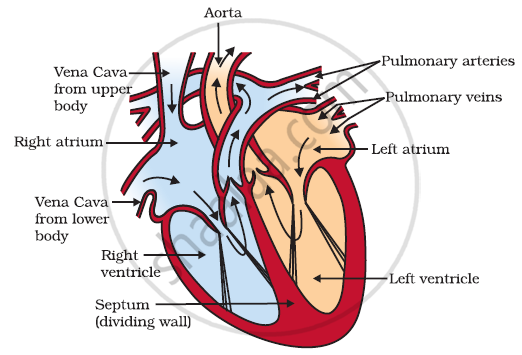 It is a muscular organ which is as big as our fist. Because both oxygen and carbon dioxide have to be transported by the blood, the heart has different chambers to prevent the oxygen-rich blood from mixing with the blood containing carbon dioxide.

This oxygen-rich blood is then pumped to the rest of the body. Blood is a connective tissue which is fluid in nature. The solid components of Blood(Blood corpuscles) are:

LYMPH:- There is another type of fluid also involved in transportation. This is called lymph or tissue fluid. to keep track of your progress.
Life Processes part 27 (Circulation in humans) [00:08:01]
S
to track your progress

Write two points of differences between arteries and veins.

In human beings the blood goes to the heart in one cycle once.

The percentage of water absorbed by raisins is calculated on dividing …………. by initial weight.
(a) Final weight
(b) Increased weight
(c) Decreased weight
(d) None of the above

Draw a neat labelled diagram of vertical section of the human heart.

Raisins put in water absorb water by the process of _________.
(a) diffusion
(b) osmosis
(c) transpiration
(d) excretion

Fill in the blank and rewrite the completed statement:
____________ artery takes the blood to the lungs for oxygenation.