There are two types of cylinder:

When the two bases of the cylinder are over each other in the exact position and the axis is at the right angle to the base, it is called the cylinder is a right cylinder. When one of the bases of the cylinder is sideways and the axis is not a right angle to the base, then it is an oblique cylinder. 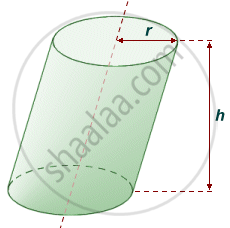