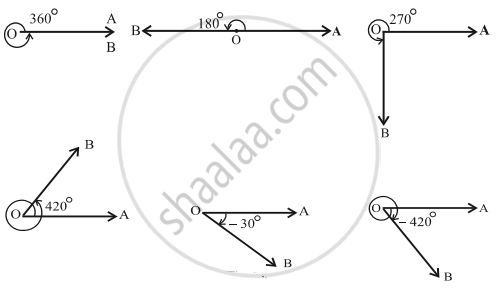 Radian measure- There is another unit for measurement of an angle, called the radian measure. Angle subtended at the centre by an arc of length 1 unit in a unit circle (circle of radius 1 unit) is said to have a measure of 1 radian.
The figures show the angles whose measures are `1  radian, –1  radian, 1  1/2  radian and -1  1/2  radian.` 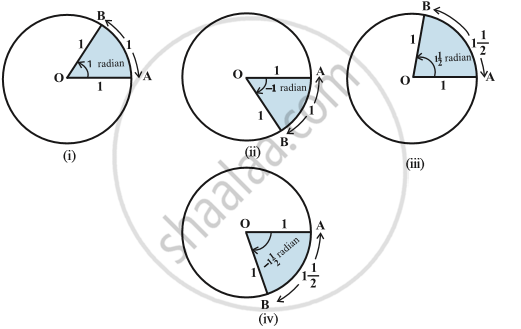 Thus, if in a circle of radius r, an arc of length l subtends an angle θ radian at the centre, we have
`θ= l/r` or `l= rθ.`
Here, θ will always be represented in terms of radian.
Relation between radian and real numbers:
Consider the unit circle with centre O. Let A be any point on the circle. Consider OA as initial side of an angle. Then the length  of an arc of the circle will give the radian measure of the angle which the arc will subtend at the centre of the circle. Consider the line PAQ which is tangent to the circle at A. Let the point A represent the real number zero, AP represents positive real number and AQ represents negative real numbers (Fig). If we rope the line AP in the anticlockwise direction along the circle, and AQ in the clockwise direction, then every real number will correspond to a radian measure and conversely. Thus, radian measures and real numbers can be considered as one and the same. 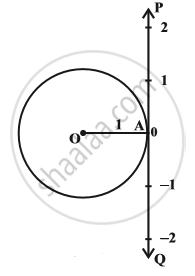 Relation between degree and radian: 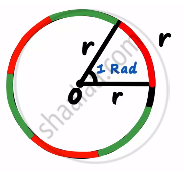 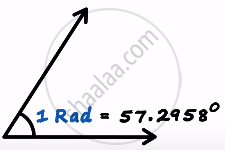 The relation between degree measures and radian measure of some common angles are given in the following table:

Notational Convention:
Since angles are measured either in degrees or in radians, we adopt the convention that whenever we write angle θ°, we mean the angle whose degree measure is θ and whenever we write angle β, we mean the angle whose radian measure is β. Note that when an angle is expressed in radians, the word ‘radian’ is frequently
omitted. Thus, `π= 180°` and `π/4= 45°` are written with the understanding that `π` and `π/4` are radian measures. Thus, we can say that