Characteristics of a Sound Wave

A sound wave is characterized by three factors: 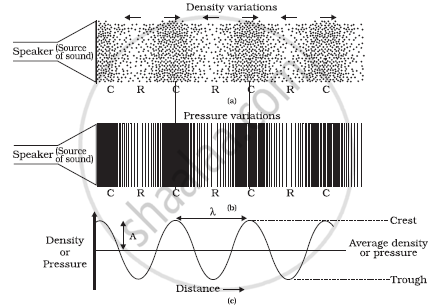 The value of the maximum or minimum disturbance caused in the medium is called the Amplitude of the Sound.
Amplitude defines if the sound is loud or soft.

The distance by which a compression or refraction of a wave travels per unit time is called as Sound’s Speed.
SI unit: metres/seconds
v = wavelength / time = λ/T = λ*F
Speed of Sound in air = 343 m/s

The compression region is represented by the upper part of the wave curve. It is a region where particles cluster together. The density, as well as pressure, is always high in this region.

A refraction is represented by the lower part of the wave curve. It is a region where the particles separate out. Refraction region always has lower pressure.

It is the peak of the curve.

It is the crust of the curve

The distance between two consecutive compressions or refractions is called Wavelength.

The time taken between two consecutive compressions or refractions to cross a fixed point is called Time Period of the Wave.

In other words, the time taken for one complete oscillation through a medium is called a Time Period.
SI unit: second (s)

Astronauts on the moon can not hear each other directly.