THE OXYGEN-CYCLE:
Oxygen is a very abundant element on our Earth. It is found in the elemental form in the atmosphere to the extent of 21%. It also occurs extensively in the combined form in the Earth’s crust as well as also in the air in the form of carbon dioxide. In the crust, it is found as the oxides of most metals and silicon, and also as carbonate, sulphate, nitrate and other minerals. It is also an essential component of most biological molecules like carbohydrates, proteins, nucleic acids and fats (or lipids). But when we talk of the oxygen-cycle, we are mainly referring to the cycle that maintains the levels of oxygen in the atmosphere. Oxygen from the atmosphere is used up in three processes, namely combustion, respiration and in the formation of oxides of nitrogen. Oxygen is returned to the atmosphere in only one major process, that is, photosynthesis. And this forms the broad outline of the oxygen-cycle in nature. 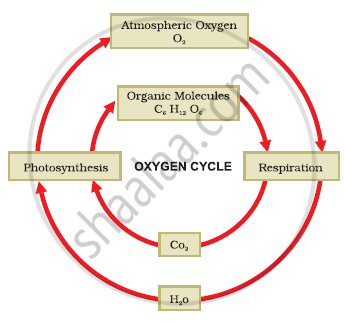 What are the two forms of oxygen found in the atmosphere?

Draw a diagrammatic sketch of oxygen cycle in nature.