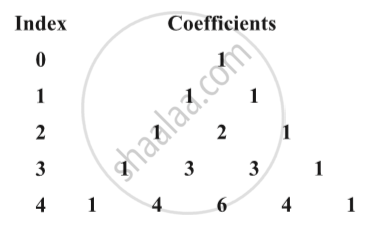 The structure given in Fig.  looks like a triangle with 1 at the top vertex and running down the two slanting sides. This array of numbers is known as Pascal’s triangle, after the name of French mathematician Blaise Pascal. It is also known as Meru Prastara by Pingla.
For this, we make use of the concept of combinations studied earlier to rewrite
the numbers in the Pascal’s triangle. We know that
`"^nC_r = (n!)/(r!(n-r))! , 0 <= r <= n `

to keep track of your progress.
Binomial Theorem for Positive Integral Indices [00:08:59]
S
to track your progress