Construction: To construct the bisector of a given angle.
Given an angle ABC, we want to construct its bisector.
Steps of Construction :
1. Taking B as centre and any radius, draw an arc to intersect the rays BA and BC, say at E and D respectively [see fig.(i)]
2. Next, taking D and E as centres and with the radius more than `1/2` DE, draw arcs to intersect each other, say at F.
3. Draw the ray BF [see Fig.(ii)]. This ray BF is the required bisector of the angle ABC. 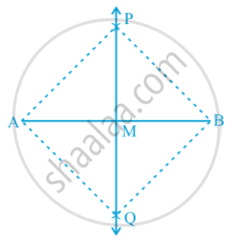 Construction:   To construct an angle of 600 at the initial point of a given ray.
Let us take a ray AB with initial point A (see following fig.(i)) We want to construct a ray AC such that ∠ CAB = 60°. One way of doing so is given below. 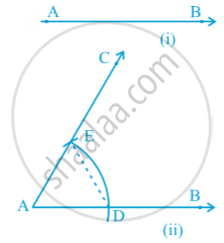 Steps of Construction :
1. Taking A as centre and some radius, draw an arc of a circle, which intersects AB, say at a point D.
2. Taking D as centre and with the same radius as before, draw an arc intersecting the previously drawn arc, say at a point E.
3. Draw the ray AC passing through E [see Fig (ii)].
Then ∠ CAB is the required angle of 60°. Now, let us see how this method gives us the required angle of 60°.
Join DE.
Then, AE = AD = DE (By construction)
Therefore, ∆ EAD is an equilateral  triangle  and the  ∠ EAD,  which is the same as ∠ CAB is equal to 60°.

Draw an angle and label it as ∠BAC. Construct another angle, equal to ∠BAC.

Using a protractor, draw an angle of measure 72°. With this angle as given, draw angles of measure 36° and 54°.

Construct the angle of the measurement :

Draw an obtuse angle, Bisect it. Measure each of the angles so obtained.

Draw a line segment of length 10 cm and bisect it. Further bisect one of the equal parts and
measure its length.