A vector  simply means the displacement from a point A to the point B. Now consider a situation that a girl moves from A to B and then from B to C in folloing fig.

The net displacement made by the girl from point A to the point C, is given by the vector `vec (AC)`  and expressed as
`vec (AC) = vec (AB) + vec (BC)`
This is known as the triangle law of vector addition.
There are two vectors `vec a` and `vec b` in following  first fig. then to add them, they are positioned so that the initial point of one coincides with the terminal point of the other in following second fig. 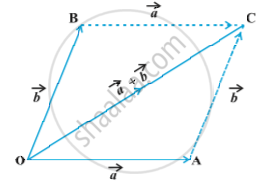