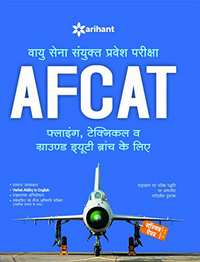 The present study package for AFCAT has been designed to help aspirants preparing for AFCAT 2016. The book has been divided into four sections namely General Awareness, Verbal Ability in English, Numerical Ability and Reasoning and Military Aptitude Test, each sub-divided into number of chapters as per the syllabi of AFCAT 2016. The General Awareness section covers History of India, Geography, Indian Polity, Indian Economy, Basic Science and Miscellaneous Facts, Figures, etc. whereas the Verbal Ability in English section covers Comprehension, Common Errors, Sentence Completion, Sentence Completion, Sentence Improvement, Sequence of Sentence, Prepositions, Synonyms and Antonyms, One Word Substitution and Idioms and Phrases. The Numerical Ability section covers Number System, Decimal Function and Simplification, HCF and LCM, Square and Square Root, Cube and Cube Root, Indices and Surds, Average, Ratio and Proportation, Percentage, Profit and Loss, Simple and Compound Interests, Time and Distance, Statistics, Mensuration, Algebra, Trigonometry and Geometry. The Reasoning and Military Aptitude section covers verbal as non-verbal skills covering spatial reasoning and logical reasoning. Ample number of solved problems have been provided in each chapter in the book. The solved problems have been designed on the lines of questions asked in previous years’ AFCAT Admission Test. Solved questions will ensure effective comprehension of the concepts covered under the syllabi of the common admission test. Also at the end of each chapter unsolved practice exercises have been provided to help candidates practice as well as self analyse their level of preparation for the upcoming examination. The book also contains AFCAT 2015 (II)and AFCAT 2016(I) Solved Papers which will help aspirants get an exact idea of the types of questions asked in the examination.

As the book contains ample solved problems along with study material designed strictly on the lines of the examination pattern, it for sure will act as the perfect and the rapid resource book for preparation for the upcoming AFCAT 2016 (II).