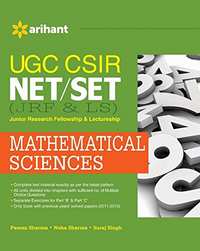 The University Grants Commission (UGC) conducts the National Eligibility Test (NET) twice a year to determine eligibility for lectureship and for award of Junior Research Fellowship (JRF) to Indian nationals to ensure minimum standards for the entrants in the teaching profession and research. UGC NET Tutor Mathematical Sciences has been revised as per the new syllabi and examination pattern issued by the UGC for Mathematical Sciences.

Over 4000 previous years’ objective questions upto December 2015 have been covered chapterwise. Some specific facts have been covered in a box and through pictures for better understanding. The book also contains last five years’ (2011-2015) Solved Papers of UGC NET Mathematical Sciences to help candidates understand the recent exam pattern. Also various types of objective questions based on the latest examination pattern to help the candidates get familiar with the new examination pattern have been provided in the book. At the end of the book, five Practice Papers for both Paper II & III have been given for thorough practice and self-analysis for the upcoming examination. This book is equally useful for various State Eligibility Tests as well.

As the book has been designed according to the latest examination pattern of UGC NET Mathematical Sciences, it for sure will help aspirants climb up the ladder of success.