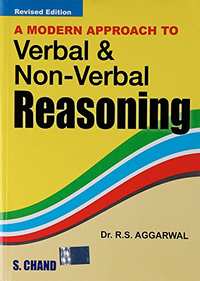 Published by S. Chand Publishers, “A Modern Approach to Verbal and Non-Verbal Reasoning” has been written based on the syllabi of the various competitive examinations to aid the students understand and cope with this much overlooked yet important portion.

Authored by Professor R.S. Aggarwal, the book is laid in two sections that tease, test and ultimately improve one's reasoning skills. The first section deals with verbal reasoning. This section has further been divided into two sub-divisions that elaborate on various ways how verbal reasoning is tested and how to apply logic to arrive at the answer. The second section, entitled Non Verbal Reasoning has sub-divisions that acquaints a student about an analytical approach towards solving non-verbal reasoning problems.

Reasoning, both verbal and non-verbal, make up a important section of not only the public examinations like income tax, bank, civil services but are also integral for entrance examinations conducted for admissions into MBA, hotel management, MCA and BEd programs as well. Hence, a handy book such as this one is a necessity for the students preparing for any of them. Written in crisp, clear and easy to understand language with proper illustrations wherever necessary, this book provides detailed information on the subject.

Apart from the solved questions with full illustrations of the steps, the book also contains various unsolved problems for the students to solve and be adept with the whole process. The answers are provided at the back in details to aid the students in coping with different types of problems.

From bank exams, income tax, railways, UPSC and civil services to CAT and other competitive entrance examinations, this book has been referred to as the prime study-tool for the entire verbal and non-verbal reasoning portion.

R.S. Aggarwal, the author is a pass-out from Kirori Mal College in Delhi and is widely known in the academic circles for having produced several bestselling books over years. After working at a lecturer at the Nanak Chand Anglo Sanskrit College (NAS) in Meerut for some time, he managed to secure a fellowship to pursue his doctorate at the Delhi University. Later on, he became a Reader in NAS, Meerut before moving to MMH, Ghaziabad. He has authored around 75 books on Mathematics for school students as well as those appearing for several competitive examinations in India.